Most & Least Affordable Areas To Purchase a Home

“While pockets of affordability still exist, they are disappearing as prices in the Fraser Valley and other parts of BC continue to rise.”

Chilliwack and Sooke were the top two most affordable areas to purchase a condo apartment.

Overall, the least affordable areas to purchase a home were West Vancouver, Lions Bay and North Vancouver; while most affordable were Langley, Sooke and Victoria.

These findings were according to a recent Vancity report, Home Stretch: Comparing housing affordability in B.C.’s hottest markets, which measured the affordability of 30 municipalities across the Lower Mainland and Victoria over a one-year period ending on February 28, 2017.

Affordability was calculated by looking at the median home price and median income and then calculating a gross debt service ratio (GDS) for each municipality. The GDS is the percentage of an average household’s gross monthly income required to cover mortgage, property taxes, strata fees and heating. 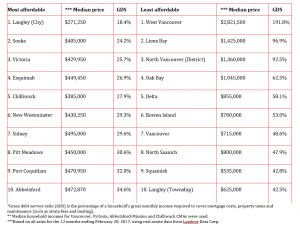 The overall affordability of residential properties sold in Vancouver worsened by 3%, while affordability in the following areas dropped more significantly:
• 38% in North Vancouver District
• 31% in Delta
• 29% in Langley Township
• 24% in Mission
• 23% in Abbotsford and Maple Ridge and
• 17 per cent in Sidney

Only two of the 30 municipalities – Richmond and White Rock – saw affordability improve over the same period, increasing by 1% overall.